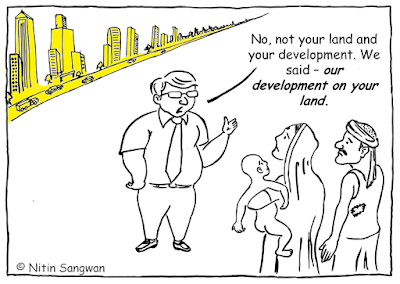 Development is a relatively simple sounding word, but is very difficult to define. Fallout of past developmental models have shown that how wrong we have been in the understanding of this word. However, whatever be the definition, it entails one irreplaceable ingredient – land. From housing to infrastructure, from schools to research parks, everything needs land. In India, land is not only an economic entity, but also has cultural and social significance attached to it. For a significant chunk of population, it is the only means of livelihood. However, historically the process of land acquisition process has been carried out in a sub-optimal manner. The benefits which accrued from the land were shared in an inequitable manner with the original right holders. Worst sufferers of this process were those like tribal people of India who had the least capacity to raise their voices. This further skewed the socio-economic scenario, especially in the context of rural-urban development. The new Land Acquisition Act of 2013 is a right step to correct some of the defects of the earlier legislation, but still a lot more needs to be done.
Posted by Nitin Sangwan at 10:57 AM