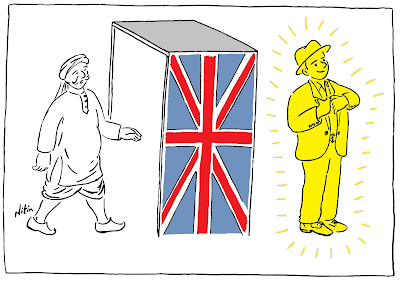 One area where colonial impact was the most profound was - cultural sphere. Our education system, our dressing, our architecture, our sports - all gave way for a new cultural system. Not only in India, it happened across the world. It is also termed as 'cultural universalization/homogenization' by some who see it as an inevitable cultural evolutionary process. Some countries like China and Japan preserved some aspects - like their languages which others couldn't -but they also gave away to a lifestyle which is primarily Western. English (and other European languages) became colloquial languages in their colonies to a large extent. This is also termed as 'cultural hegemony' by many socio-political analysts, while others don't have such an adverse view. Some form of cultural exchange is inevitable in a globalized world, but it is problematic if it is skewed. When some ideas dominate over others, there can be cultural backlashes as well. Recent instances of call to glorious pasts and rise of fundamentalists are cases in point.

Posted by Nitin Sangwan at 7:20 PM