After successive failures in tests as well as one-days, a veteran cricketer  commented that Indian Cricket Team looks jaded. Another commented IPL has ruined Indian cricket. When Olympic games were started, professional players were barred from participation to conserve the sanctity of the games and the spirit of sportsmanship. A century later, Indian cricket seems to be suffering from much more than mere excess commercialization of the sport.  Greed of BCCI is taking a toll on performance of team as well as on morale of team members and Team India is seen as merely a money-spinning machine by BCCI. BCCI should see to it that its golden goose remains healthy if it want the goose to lay bigger eggs!! 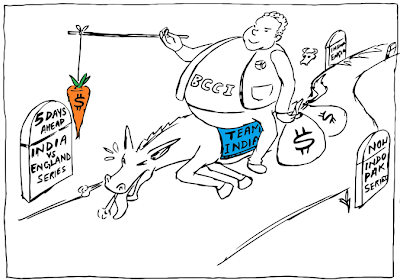