DGCA finally revoked the license of Kingfisher Airlines. The Indian Richard Barnson after much haggling with bankers and the aviation body found himself in a tight spot and his flamboyant carrier grounded in wake of mounting debt, airport dues, salaries of employees and what not. The tycoon who once remained in news for his extravagant lifestyle and company of thinly clad chicks is now living a low profile. Another aspect of the whole story is that while it is very convenient in this country to default a few thousand crores on the name of entrepreneurship and still roam freely around with head raised high, a poor man on the other hand is denied a loan of even a few thousand bucks and is put behind bars if he defaults this measly amount due to some genuine reason.

Liquor baron must be thanking his other 'Kingfisher' for standing by him in this tough time!! 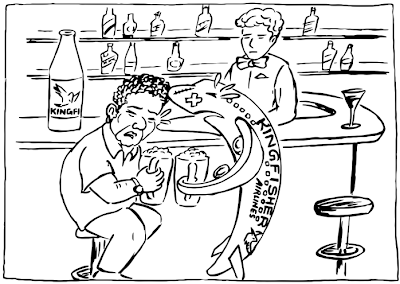 Posted by Nitin Sangwan at 7:20 AM