Sangam or the confluence of the three rivers - Ganga, Yamuna and the now extinct Saraswati - is one of the most sacred places of Hindus where Maha-kumbh mela is organised after every 12 years. Today, these rivers need to be protected from a different demon altogether - the demon of pollution. PM on inception of the mela declared that polluters will be stringently punished. However, it is ironical that he himself chairs the supreme authority NGRBA (National Ganga River Basin Authority) that is responsible for keeping the holy river clean and he has convened its meet only three times since it was formed in 2009 when Ganga was also declared as 'National River'. Similarly, earlier Ganga Action Plans, precursor to NGRBA, and Yamuna Action Plan had also failed to impress despite draining thousands of crores literally. Pollution is a threat to not only the fauna of rivers, but also to the health of pilgrims. 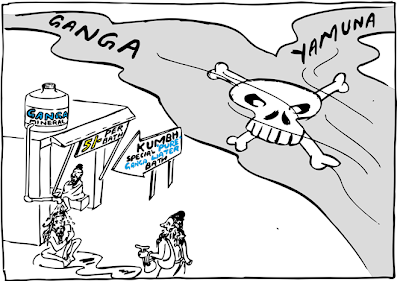 Posted by Nitin Sangwan at 4:28 AM