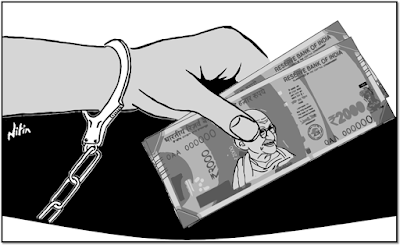 Most commonly understood meaning of integrity in public service is being incorruptible. Integrity is often linked with taking bribes. However, integrity is a much broader concept. It is commonly defined as a harmony among thought, speech and action. So, a person of integrity has a command over not only his or behavior, but also his thought process and he or she always walks the talk.
Posted by Nitin Sangwan at 5:01 AM No comments: 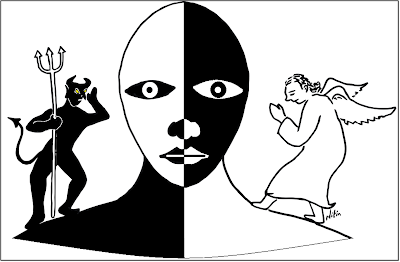 This one is drawn randomly and it is a very cliched theme. When I was drawing this one, a thought crossed my mind. Which part of our nature is the devil trying to influence? Our darker side is already on his side, so he shouldn't waste his energy in alluring that persona of ours. This is the core idea of this illustration which also distinguishes it from the other similar illustrations.
Posted by Nitin Sangwan at 9:56 AM No comments:

Email ThisBlogThis!Share to TwitterShare to FacebookShare to Pinterest
Labels: Devil and Angel 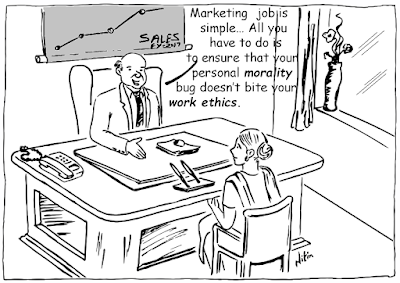 Ethics and Integrity are so important in public service that UPSC conducts a separate examination to test that in the candidates. When I first encountered with these terms, I looked them up in many dictionaries for the precise meaning and bizarrely, I didn't find a clear distinction between the two terms - ethics and morality. Invariably, they referred to each other circularly in most of the dictionaries. Digging a little deeper with the help of Google dev, I got some clarity which I am expressing here with the help of this cartoon. Ethics is generally a broader term and it is a set of principles which are more or less universally accepted. Morality on the other hand can be very personal thing concerning right and wrong.
Posted by Nitin Sangwan at 8:25 PM No comments: 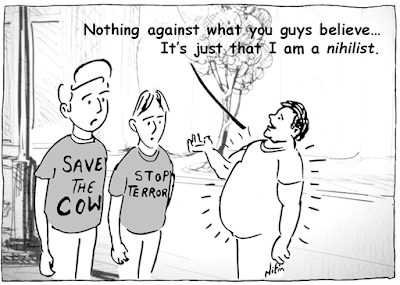 Just a random thought on how a nihilist would behave in the current socio-political milieu. Nihilism as an ideology came in vogue in early 20th Century Russia with a group of revolutionaries who were highly fed by all contemporary forms of rulers and government structures. They started to believe that nothing good can happen in Russia of that time even if a new regime replaces the existing one. As a result, they rejected all the solutions that were contemplated during that time. Today the term is used more often to denote a person who is very pessimist about everything that exist in his or her surroundings. The cartoon, however, uses the idea in a slightly different sense of meaning of the term.
Posted by Nitin Sangwan at 6:29 AM No comments: 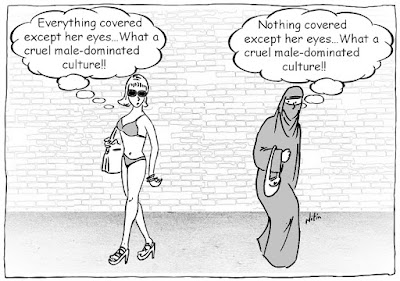 How often do we contemplate over the appropriateness or inappropriateness of the action of others while looking at them? Why behaving in a particular manner considered superior to other manners? Or perhaps it is not so. This is the theory of relativity in social world. It says that we are all different and not necessarily superior or inferior to each others. This applies everywhere, from religion to language and so on. The cartoon is inspired from a similar cartoon that I came across some times ago.
Posted by Nitin Sangwan at 11:12 AM No comments: