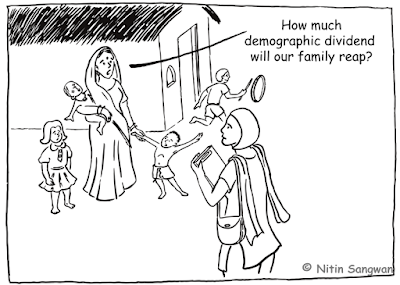 Demographic dividend is often cited as a panacea for the over-populated developing countries. It is often assumed that the population is actually not a burden and the part of the population in the working age group shall be productive and contribute towards economic growth. This in turn will have domino effect on all socio-economic developmental dimensions. Over-enthusiasts often project that a young population of a billion will translate into a pair of billion working hands. However, human beings are not machines. A billion young hands are not same as a billion machines. All humans have different capabilities and sometimes these capabilities have to be developed also. Education and skill development are two important aspects of this development process which can transform the potential of population into real tangible demographic dividend. Without doing so, the potential demographic dividend may turn out to be a demographic burden instead as a billion pair of hands also come with a billion mouths to feed. Behavioral dimension of the population has also become increasingly important. Punjab is an example. If the behavior of the young population is allowed to go awry, prospects of demographic dividend dim even further.
Posted by Nitin Sangwan at 8:27 PM 1 comment: