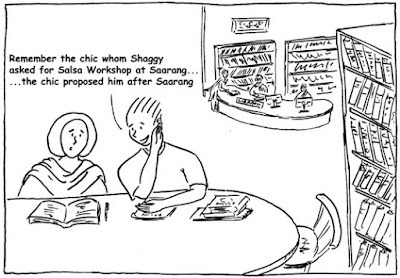 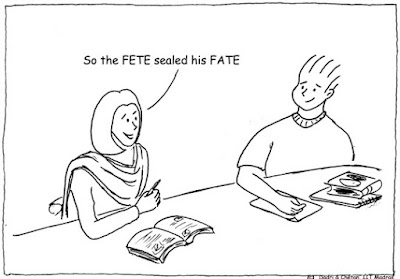 Saarang- the annual cultural fest of IIT Madras- is the harbinger of change, hope and masti in the Insti.

I will start with what happens just before Saarang. The sale of deodorants, shampoo and soap increases on the local Gurunath shop. Mannerisms becomes rampant in the campus. 3/4ths and shorts are less common among Insti guys. Shopping for clothes and accessories is in full throttle as the Insti junta takes full advantage of the end of the season sale.

On the Saarang days bathrooms are packed like anything. Even the ones who have almost forgot the word ‘bath’ haggle for their turn in their impatient chaddis. The hostels’ zone become a live olfactory Shoppe as the newly bought spirits and perfumes are applied in generous quantities. As per a survey, the amount of deo and perfume that is consumed in the Insti during Saarang far outweighs the quantity that is used otherwise during the rest of year.

This is open season at IIT M and hunt for chicks has begun.

As the shares of outside Insti chicks soar like Sensex in good times, shares of the Insti gals (most are not chicks, so ‘gals’ will be more appropriate for the sake of majority) plummet as if it is dreaded Black Monday. One can easily spot the ‘see you after Saarang you ugly monkey’ look all over the faces of Insti gals. Vols, Coords and Cores flaunt their badges proudly- It is the next best way to plain shouting to tell the chicks that you are the much talked IITian. There are many events that facilitate ‘interaction’ of Insti junta with outsiders. Dance Workshop is one of them. How to select a girl for that? Insti junta has become wiser over the years and has learned the ropes of flirting. Usually they focus chicks from hep and ‘only for girls’ colleges like Mt Carmel and Stella Maris. They also don’t mind waiting for one full day and stalking the chick to check if she is with her boyfriend (who is not around at the moment) or talking excessively over the phone (to her boyfriend of course) to finally pop the question – ‘Hey, I am Bond and would you mind becoming my partner in Salsa workshop tomorrow’. Deal, and the fate, is sealed.

As the fest approaches the curtain calls, the crowd become less sparse. Chicks become as difficult to spot as a deer outside the campus. A nostalgic feel shrouds the campus and ‘the poor’ guy feels poorer after a glimmer of rich feel. The drought is back in the Insti and rooms, and the occupants, are shaggymax once again.
Posted by Nitin Sangwan at 12:02 PM