It's Time to Strike Shaastraasana !

‘Shaastraasana’ is nothing but a state of mind rather than a true ‘Aasana’. You can strike this ‘Aasana’ any time provided it is from 30th Sept -4th Oct. This is the time when true Shaastra devotees eat Shaastra, live Shaastra and sleep Shaastra. 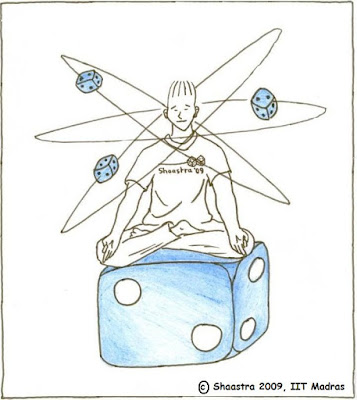 Shaastra means Science. Year after year, the biggest tech fest of all has proved that Shaastra is not about science alone. Shaastra is much more about than plain engineering and science stuff. scintillating Laser shows, mind-blowing quizzes, enthralling workshops, engrossing lectures and Informals can blow anyone away. The increasing popularity and increasing competition at the events has made the fest ‘the most awaited event ’ of the year. Race your imagination and betray your beliefs as you come across event after another event. It’s fun, it’s thrill, - It’s Shaastra-2009.
Posted by Nitin Sangwan at 9:01 AM