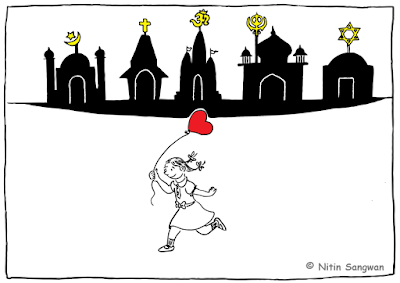 'Hind desh ke niwasi sabhi jan ek hain, rang roop, vesh bhaasha chahe anek hain' was a line from a beautiful 7 minutes animated film titled 'Ek, Anek aur Ekta' by NCERT in 1970s. Most of us remember these nostalgic lines from the video which won National Award as well as Best Children's Short Film in Japan. The message is so relevant even today in the chaotic order that prevails across the globe today. We tend to forget that all religions and philosophies point to some simple truths of life. We have tendency to deify pious humans into Gods, but we ourselves often fail to behave like humans.
.
Posted by Nitin Sangwan at 2:08 AM