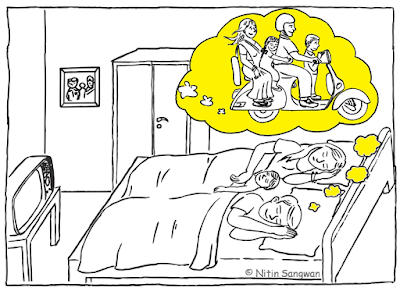 'Middle Class' is an interesting word. People belonging to this stratum of society are so heterogeneous that many would even agree that they don't even belong to single class. A bureaucrat, a skilled workman, an entrepreneur, an emerging artist, a doctor and so on, each one of them claim to belong the ubiquitous middle class family. To reposition these heterogeneous members, concepts like 'upper' and 'lower' middle class were also introduced, but they are also equally volatile as the concept middle class itself. Some project middle class as the torchbearer of social innovations and change, while others blame it as an inward looking group always preoccupied with its own trifling issues. Demographers see a burgeoning middle class as potential future labor force, while the industry looks upon it as a profitable consumer base. Middle class imagination is far more diverse today than it was a couple of decades back when a typical family with a scooter was a poster child of the Indian middle class.
Posted by Nitin Sangwan at 9:22 AM